Design Evolution From Noun to Verb

Up until little more than a decade ago, design has been seen as an aesthetic or styling element for an object. In the 2010s, Apple is arguably the company that has shown the world what design could be - raising the standard of design from being perceived as a noun to verb.

Let’s compare what it means for design to be a verb. 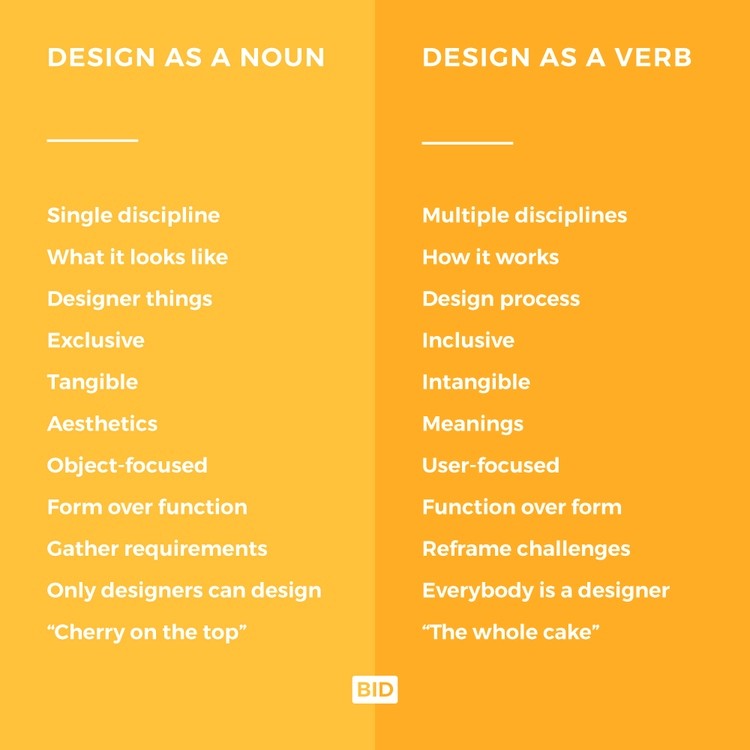 From “what it looks like” to “how it works”

It’s not about what the “thing” looks like anymore. Sexy cars, beautiful hotel interior. Although it still matters, design as a verb is about how something works. The real value is in the experience. It’s about how it works. It’s about the self-driving car experience, and robot hotel experience.

From designer things to design process

Designer shoes, designer house, designer bag, designer car. Long gone are the days where they luxurify something by calling it designer something. The value has shifted to process-centric on how something works beautifully to achieve jobs that needs to be done or fulfill desires of consumers.

From exclusive to inclusive

Designer things used to be exclusive for exclusive communities. It’s now about inclusiveness in bringing people and process together to achieve a better outcome. You can now enjoy beautiful things and pleasant experiences at affordable prices.

From tangible to intangible

Capitalism used to be about owning things. The more expensive, the better. The new capitalism is about intangibles - experiences, services, process, rules, and regulations. Consumers are now spending money more on experiences than things, such as travel in exotic countries.

From aesthetics to meanings

Being pretty, beautiful, sexy, sleek still matters. However everything that is designed needs to have meanings. From anything including but not limited to decorations, colors, shape. What do the lines imply? Why pick certain shapes over others? When a decision made to the design is without strong logical reasons, it becomes meaningless.

From object-focused to user-focused

We still objectify things and humans. Designing a remote control with many complicated buttons or a vacuum cleaner that requires a cable to be ported in the power socket. Focusing on user is paramount. How about simplified remote control with only a few buttons that users really need? How about wireless vacuum cleaner that is light, quiet and ergonomic enough to make vacuuming a good experience instead of a dreadful chore?

From “form over function” to “function over form”

Function first, then think about what is the most suitable form that fully caters the function. Function in this case has a broader meaning and context. It’s not only about being able to do certain tasks, but also wider range of tasks, how it affects other stakeholders and the environment.

From “gathering requirements” to “reframing challenges”

Stop collecting requirements like taking orders or copying the features of similar propositions. The role of new designer is to reframe the challenges and problems that have been presented upfront. Question it. Find out the truth. Dig deeper. See from different perspectives. Put yourself in the shoes of others. Reframing the input gives an entirely different output - which usually means being able to solve bigger and latent challenges.

From “only designers can design” to “everybody is a designer”

Design is not only for the likes of celebrity designers like Jony Ive or Karim Rashid. Every one who can devise a plan, re-think differently, execute beautifully are designers. Steve Jobs and Elon Musk are not your traditional designers, but they are great designers who changed the world with their innovations.

From “cherry on the top” to “the whole cake”

Have you ever heard your boss says “make it pop!” or “make the logo bigger”? It’s still common today, however design must not be seen as a styling that you add after the product has been built. You need to consider how it works, what it looks, when it works, and a lot more scenarios to drive informed decisions. Literally everything.

Design is here to stay. It’s evolving. We are better off today that where we were a decade ago. These are the paradigms that are shifting in the design industry.